skip to main | skip to sidebar

"Little things I should have said and done..."

Yes, the immortal words of the Pet Shop Boys (not originally, I know) apply to the blog. It was on my mind to update, but I never took the time. I'm jumpstarting it once again, and promising daily updates Monday through Friday for the rest of April. I hope that making it a habit for a month will engender the habit longer-term, but we'll see. It can't hurt!

Posted by TheJenmeister at 1:15 PM No comments:

From the Abstraction Foundry: scraps from the workroom floor

Since I began knitting in earnest, I've become a smidgen obsessed with the craft. In that I think about knitting quite frequently. That is to say, I ponder yarn, projects, needles, knitters, designs, color, patterns, etc., and how they all interact, all the time. Constantly. I'll be writing a work email, and midway through sentence composition I'll be struck by a bolt from the blue. (Knitting-related lightening strikes are, by default, gentle and a bit woolly, but still firm.) This bolt is a grain of sand, a bit of brain grit that my mind will then form a pearl around in its attempts to expel it. 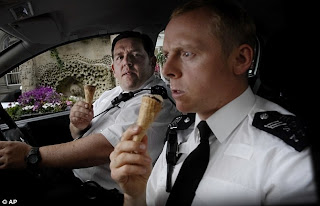 I even think the word "IDEA!" in Simon Pegg's voice.

I'll suddenly need to know all about Bluefaced Leicester wool, and its properties, and how it takes color vs. merino, and what does the sheep look like anyway? and which BFL yarns are commercially available, and look there's a cool indie dyer who does sock-weight 80-20 blend with nylon, and that colorway would look amazing as Kitman Figueroa's Damask shawl, or maybe a more geometric design, and I should try to design my own this time...

(Even if you're not a knitter, you should be familiar with this phenomenon: Wiki-binge and YouTube trance start the same way. You think of X, and must go read about/watch X, and then you click a link to that related thing, and so on, and it leads you further and further from the original source.)

But I'm off, and down the rabbit hole, mentally casting aside my 18 (!) active or partially finished projects and my substantial stash of beautiful yarns in favor of the mere dream of a brand-new project--my shiny new pearl. The truth is I don't have time to knit all the projects I put together in my head. I don't knit quickly or monogamously enough to get through even the handful of actually important knits in my life. (I'm eyeballing you, M&M's wedding afghan. For their fifth anniversary, now...?)

So I have all these cool ideas, and they just languish in my brain, where inevitably they are reabsorbed and their raw materials are reused. It's as if a seed floated in on the breeze, and I gathered a bunch of soil and fertilizer and water around it until it sprouted, and then I abandon the sprout to turn to compost in order to tend the rest of my head forest. No longer! I'm giving the plants/pearls away, documenting the notions here and hoping they find their way to some knitter who doesn't know what her/his/its next project should be. 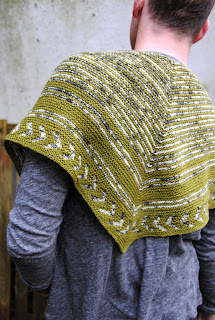 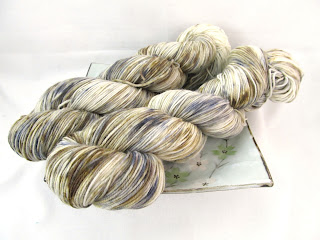 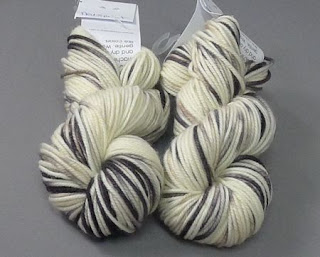 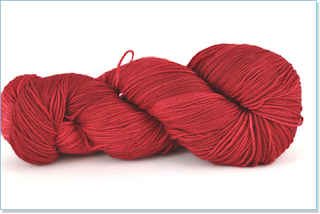 The brain grit that spawned this one: seeing a skein of Hedwig by Black Trillium at Vogue Knitting Live! Seattle this past weekend. I loved it but couldn't quite parse out how best to use it.
Posted by TheJenmeister at 1:12 PM No comments:

I'm with Charlie: "I'm tired of pretending I'm not a total bitchin' rock star from Mars." 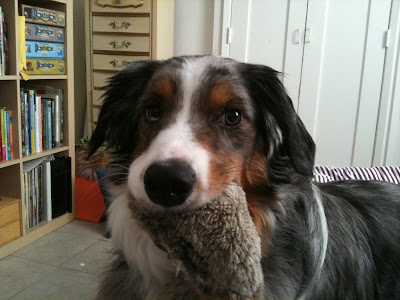 Posted by TheJenmeister at 12:54 PM No comments:

It is cooooooooold out.  I am wearing a lot of wool, even for a knitter.  But it's sunny!
Here are some pictures to warm your heart and make your Monday brighter. 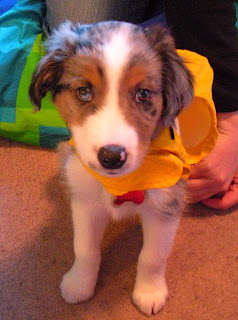 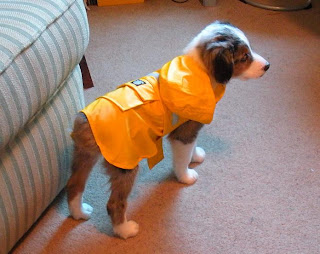 Thanksgiving weekend may, in fact, be the best weekend of the year.  The reasons?
First: it is a four day weekend for anyone in a government-related job--like me.  Nice to be paid for two days you don't have to work, and the short work week beforehand is definitely a low-effort work zone.
Second: the quality and quantity of good company increases immensely.  I spent 75% of my weekend knitting and chatting with Adrienne, and Sam got to spend plenty of time with both Root Beer and Tesla, including two long visits to the dog park.  I spoke on the phone with Mom, Dad, Colleen, Grandma, BJ, and Aunt Ginny, which was nice.  The Upstairs Crowd maintained an open-door policy all weekend, so much watching of old movies (Flash!  Ah-aaaaaahh!  He'll save every one of us!) and playing of the Xbox (Soul Calibur IV) commenced.  Wino Scrabble has long been a favorite of mine, and I observed (and kibitzed) a single game.  (I didn't feel like playing without Mike around to periodically scream "That's not a real word!" at me while inventing hilarious new obscenities that make my mom laugh until tears run down her cheeks.  Somehow playing a six letter word parallel to another six letter word and grabbing two triple word scores loses its charm without watching my kid brother writhe in agony over the veracity of all the two-letter words formed.)
Third: the food.  Oh the food.  For Thanksgiving Day I brined our 20 pound turkey in a mixture of apple cider, sea salt, sugar, peppercorns, star anise, and water.  I threw in a little bit of hard apple cider that was sitting in the fridge.  We dubbed the bird Teddy Kennedy as it was quite robust and clearly working for social change.  (Actually they were both rather fat and dead, and it sure beat the other possibility--Goebbels.  We thought a [dead racist bastard] Nazi name was not auspicious.)
Anyway, after overnight brining Teddy Kennedy received a rubdown with a stick of unsalted butter, a third cup of very green and fruity olive oil, applewood smoked salt, fresh ground pepper from a four peppercorn blend, the zest of two large oranges, and about 2 bulbs of garlic, which I blended together with my amazing hand blender's food processor attachment.  I stuffed him with an onion and the two oranges, he roasted in the oven for about 5 hours, and then he fell apart when I tried to carve him.  Everyone liked the taste and there are few leftovers.  (I saved the carcass for tortilla soup, which will happen at some point this week.)
I also made potatoes au gratin with cave-aged gruyere, which was a big hit.  Other food on the table included mashed parsnips & carrots (yes, they are in fact better than mashed potatoes), two types of stuffing (savory sage and fruit & nut), roasted brussel sprouts, mustard greens, apple & butternut squash soup, cranberry orange relish (the be-all and end-all of cranberry sauces: raw and fresh tasting), and tomato pudding (weird as all hell--like a soupy ketchup bread pudding).
I enjoyed my minibreak immensely and am refreshed and ready to get back to real life.


Posted by TheJenmeister at 11:02 PM No comments: 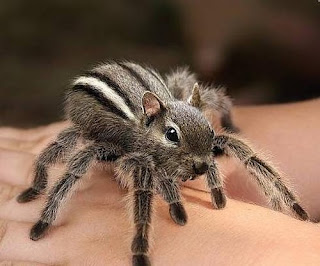 Happy Friday...the 13th!!!  (I cannot help but love this absolutely weird photoshop pic.  It is demented.  Who thought of doing this in the first place?  And are they freely roaming the streets?!?)
Posted by TheJenmeister at 2:01 PM 1 comment: 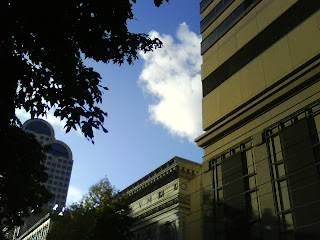 Downtown Seattle, 2:30 pm. Haven't had a chance to thank a living veteran yet, but thanked Grandpa & Papa in my heart.
Posted by TheJenmeister at 2:46 PM 1 comment: 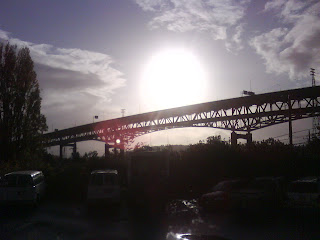 The Daystar! It burns!
Posted by TheJenmeister at 3:24 PM No comments:

I have a few (not many) socio-political issues that really, really rile me up--there are many that don't. I could give a crap about paying taxes--there will always be taxes. Don't really care about illegal aliens--enriching our culture or ruining our social services, stealing our jobs or contributing to the economy, arguments can be made either way and I just don't think it is a priority concern. Not passionate at all about states' rights vs. the Federal government. But universal women's rights are basic and IMPORTANT. Women are everywhere, every race and religion, and are treated across the board as less-than-men for no logical or justifiable reason. I read an article about a legal measure with unknown consequences for women's rights and unforeseeable applications against women in the state of Colorado, which may be enacted even though it is 2009 and we are living in the future! My bullshit-o-meter pinged up past the red line for this one. Also, WTF is up with the Personhood movement?!? The language used by this group is laughable. "Pre-born child"? I guess unborn is "too negative." Just like "pro-life" sounds so righteous, when they really could have gone with "anti-choice" or "Babies: worth more than women." Why is it so difficult to treat women as people rather than either sacred, untouchable goddess-like creatures or simple, hollow baby vessels? Why should a woman's life decisions, good or bad, be any more or less legally actionable than a man's? Why is a collection of cells/baby ranked above the woman/mother who carries it in terms of rights? South Carolina, you have FAIL.

What to do about this? I went to the NOW website. I Signed the Pledge, and maybe you will at least look at it too...?

Side-note
My personal feelings on childbearing/rearing are a) I don't want a kid, but b) I'm happy for you to have one if you want one and I'll pay taxes to educate and care for your wee one and I'll smile at it on the bus and chat with it and admire its cuteness, however please don't bring it to an R-rated movie or sit-down restaurant late at night and don't try to tell me I should behave differently because there is a child present.

Posted by TheJenmeister at 9:24 AM No comments:

This is a fabulous video proving that we are cursed/blessed to lived in interesting times. So it goes.

Posted by TheJenmeister at 8:20 AM No comments:

I love this old clip from The Daily Show. The two funniest/cutest Stevphens ever plus re-lived childhood trauma, druidic cabal, and candy? AWESOME.

Posted by TheJenmeister at 8:47 AM No comments: 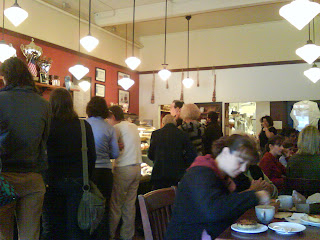 It's the me show, starring ME!